We decided, at the beginning of the year (and with the help of an excellent new field guide, Common Spiders of North America, by Richard Bradley, U Cal Press, 2013) to see if we could learn the spiders, a group that had always seemed to us too daunting to even begin on. Well, it's near the end of May, which will mean it has been five months that we began working full-time on this new venture, and I can't believe how much we have learned (I suppose coming from near zero that's not hard to do). We're still seeing one or two new species a day, but the great majority of spiders we see now are familiar ones. It's not that we used to see dozens of unfamiliar spiders every day, it's that we didn't see them at all. It's one more demonstration that if you don't try to put a name on something, you simply don't see it.

The Picasa Web Album I have been keeping now contains images of 130 species we have more or less identified, probably more than anyone besides me is interested in seeing. Even we sometimes feel a bit overwhelmed by the plenty. When I say how many we have identified, I am using the word loosely. Since we are beginners, I have no doubt we have made mistakes, and many of the spiders simply are difficult to pin down to species. Sometimes we see a new spider, find a picture of it in the guide that exactly matches it, read the text and find that its behavior is exactly as we witnessed it, and then, as a sort of afterthought, the author of the guide informs us that there are 47 species exactly like that one, and you need to dissect them to see which particular one you are looking at.

Nevertheless we are coming as close to the identity as we need to for our purposes, and we are noticing so many things about different kinds of webs, different hunting strategies, different courtship ceremonies, that we are getting ample pleasure for our obsession. The main thing: we are walking the same paths we have been walking for years, and seeing them all new. We have lived in the same house for 37 years, and it is an adventure crossing the front yard.

And now we have, in effect, doubled the adventure. You see, it had been in my mind that many, perhaps most, spiders are nocturnal. It was time to explore that side of things. By the simple expedient of putting on our head lamps (that we had used in the tropics for night walks), in the evening last week we went out the door into a brand new world.

With our lights strapped to the middle of our foreheads just above our eyes, the beam went out in the same line as our sight, and the spiders looked directly back at our eyes, and theirs shined up as brilliantly as cat's eyes (well, much smaller). Everywhere we looked out in the leaf litter, the eyes of the wolf spiders glittered back at us. During the day, if we spotted the wolf spiders at all in the leaf litter, they quickly dove out of sight under the leaves. At night with their eyes shining it was easy to see them, and harder for them to see us hidden in the shadows behind our lamps, so that if we didn't clump around too loudly, we could approach them rather easily, and get very nice close-up pictures of them out in the open.

Here are a few of the wolf spiders and crab spiders we saw. First, Varacosa avara, then Gladicosa gulosa, and then, the Leaflitter Crab Spider (not very many spiders have common names). 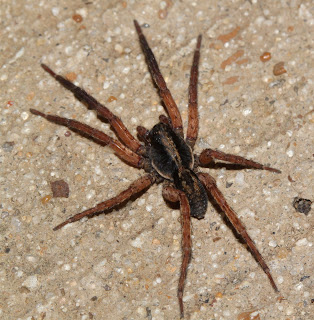 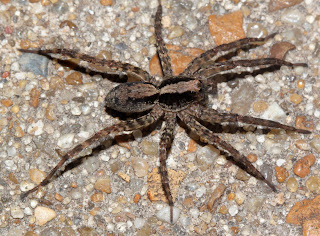 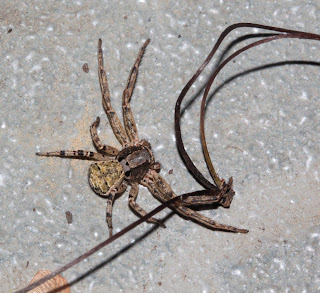 It is well known that color-blind people can spot camouflaged things more easily than people with normal color vision. Presumably when something has the same patchily-colored pattern as the background, it is difficult to separate it out. But if you don't see its disrupting color, it isn't able to fool you. At night no matter how brightly lighted, you are seeing essentially in black-and-white. So we also discovered this night something we had often heard about before: caterpillars (moth and butterfly caterpillars are another of our obsessions) are much easier to spot separated from their protective coloring. Cheryl was casting her light around in the leaves of a sugarberry tree (one of the larval food plants of the hackberry butterfly) and immediately picked out a number of hackberry butterfly caterpillars. Then she realized she was looking at an adult hackberry butterfly and a moment later saw next to it the chrysalis it had only recently emerged from. The butterfly flew away into the darkness before she could get a photo of it next to its empty chrysalis case, but she quickly began spotting other chrysalises nearby.

This is remarkable because the hackberry chrysalis is one of the most cleverly camouflaged that I know of and we hardly ever spot one though they are in plain sight. Here is the hatched one we saw, and here is another one unhatched, and if I had not put it dead center in the photograph you would not have seen it. 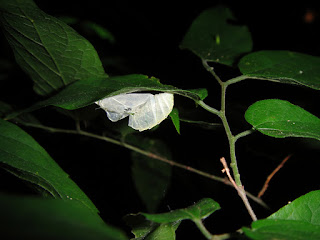 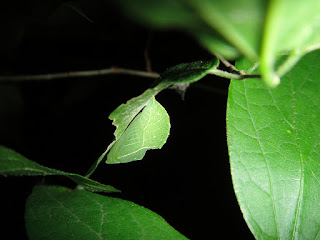 It was a very beautiful evening, warm, a light breeze, almost no mosquitoes. We wandered back to our pond. As my light flashed back and forth with my steps, it picked up a violent battle scene ahead, a large very powerful red carpenter ant (their jaws are strong enough to chew galleries through solid wood) fighting with a spider! By the time we got up close the spider had it wrapped up and was carrying it on a line up off the ground to a twig about three feet up on the trunk of a small tree. It was a small mostly black spider with some white spotting, and must have been an ant specialist. Few spiders can stomach (literally) a formic-acid filled ant, and very few will chance feeding on such a dangerous creature that has a whole army for backup. This spider apparently had dropped down to the ground on a line, caught the ant, and immediately carried it back up out of reach of the many other carpenter ants foraging nearby. In the the field guide the spider that most resembled it was Steatoda albomaculata, and when we read about it in the text, sure enough it was an ant specialist. 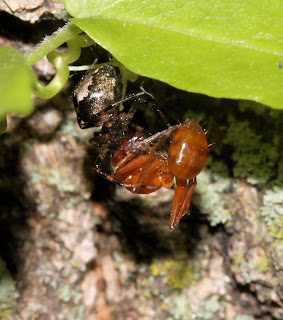 In the middle of the yard we saw the bigger shine of a large wolf spider and crept up on it, but our legs kicked some sticks, the movement startling the spider which quickly disappeared down a burrow. A number of spiders live in burrows during the day, then wait just outside them at night for any passing insects. We looked down the burrow, and saw what looked like headlights at the other end of a tunnel. We went off looking for other spiders, then sneaked back more carefully a few minutes later. It was out and allowed me a quick shot before disappearing again. When we looked at the picture later we recognized it as being in the genus Hogna, a group of larger wolf spiders that often live in burrows. We believe it was Hogna lenta. 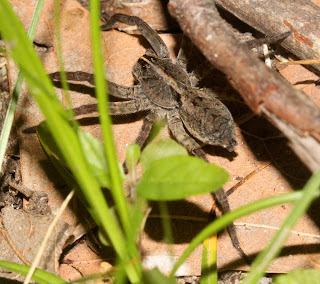 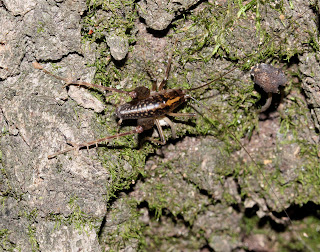 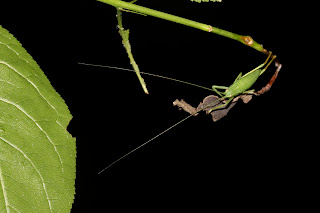 We went around to the front of the house and found a largeish wolf spider with woolly black front legs. This character identified it as a male of the species Schizocosa ocreata, one I had been hoping to find, so I was carefully zeroing in on it and taking my picture, even as Cheryl was shouting behind me that there was an unbelievable spider on the backporch step. Here's the picture I took quickly so I could run and see what Cheryl was shouting about. 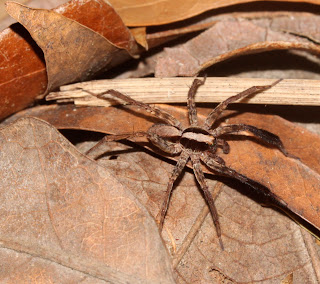 She was right: the spider was beyond belief. It had a tiny body that was held high up off the ground by unimaginably long legs. It looked like some sort of agricultural sprayer that goes out in the field on great high legs so it won't knock down the tall crops. 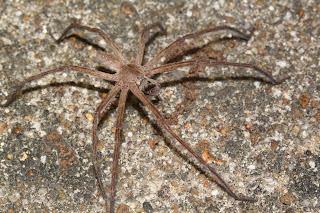 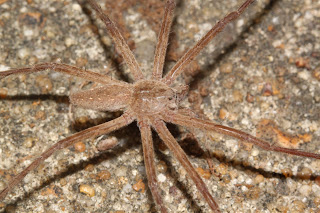 While we were taking as many pictures of this as we could I noticed out of the corner of my eye a small pale-colored spider hanging to the siding of the house a few feet from my head. It looked so unprepossessing I ignored it, and just as an afterthought before we got up to race in the house and look at our pictures, I took a quick snap of it.

When we got into the house, we spent some time trying to work out what the long-legged spider was. It turned out to be the male of a common species in the yard, the Nursery Web Spider, a spider (the female anyway) of normal proportions famous for building a tent to raise her children in, while she guarded them from the outside. The males of many spider species tend to have a small body with extremely long legs, but this one carried the pattern to its absurdest degree. But while we were working this out I happened to glance at the shot of the pale little spider we had seen last and we realized it was the star of the evening, one of the spiders we were most hoping to see this year. We quickly raced outside to take some more, and more careful, shots of it. It's lucky we did, because a minute later it crawled out of sight somewhere inside the house siding.

It was a Spitting Spider.

This weak-looking species with its drinking-straw legs slowly walks to within 3 or 4 inches of a small fly or other prey item, and while the fly sits quietly, thinking it is a safe distance away from the spider and can fly if it needs to, the spider spits a mixture of glue and venom at it, spraying in a circle around it, and when the fly thinks to fly, it finds itself trapped in the glue and already dying from the poison.

Here are some pictures of the frail but quite elegant creature. Note how the cephalothorax rises up higher towards the rear, to house its glue and poison factory, and note that this is one of the rare six-eyed spiders, three double eyes arranged in a triangle. 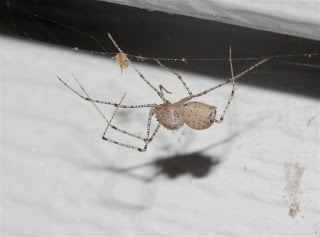 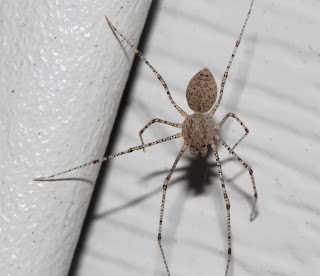 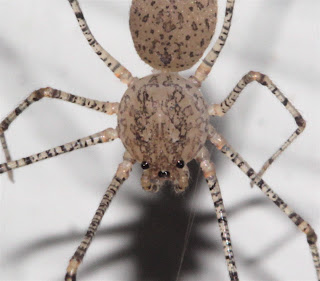 The darkness behind us had left us enclosed in the world of these small creatures. For background music we had owls calling and coyotes yipping. We had no sense of time or space but hours had gone by. Under such rapt conditions these harmless little animals that might horrify or disgust some people, or at least call for systematic spraying with chemicals, had seemed to us quite beautiful.

It's addictive. We have gone out three evenings now in our garden, and a fourth time at our friends Jeff and Sue's cabin on Lake Norfork, where we saw a host of new species we are still puzzling out. It was a lovely evening up there and we dragged them and another friend all out and they enjoyed it with us.  How impoverished a life without nature would be.

My wife Cheryl and I have always loved everything to do with nature, but in the last ten or fifteen years we have been especially focused on insects. If the day is sunny, we grab our binoculars, our cameras, and take off for the wilds. Even on a poor day the marvels pile up quickly. A new season is just beginning. In this blog I mean to record the things we discover, the photos we take.
For books and other projects, go to:
https://norman.laversfamily.net/